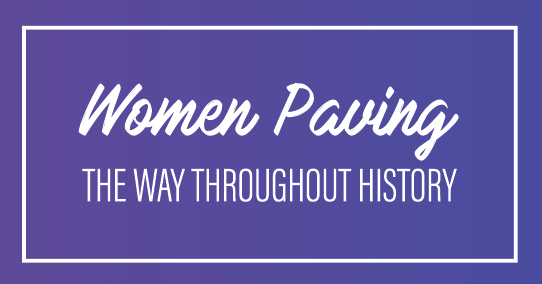 Women Paving the Way Throughout History

Throughout the history of humanity, women have played a crucial role in pushing societies around the world further. Women have played various roles and worked to improve our society one generation at a time. The path has not been easy, but over the years, more women have stepped up and helped to push our society forward for the better. In honor of Women’s Day, we wanted to share a brief insight into women’s history and what women have accomplished throughout the years.

The Power of the Mother

For a long time, women throughout history were largely focused upon preparing the next generation. These powerful women carried out the task of giving birth to children, but they also were responsible for raising them and overseeing their growth. Every new generation was raised by powerful women who were sculpting the future through the children that they raised. On top of it all, these women were running households within complex social constructs. At every level, women kept society moving forward.

The face of the modern mother has changed. Now, mothers are pushing society forward in other ways. Some mothers are working while raising children. Others are leading social efforts and pulling the community together in online spaces. Women are sharing tips to raise healthier and happier children—and they are succeeding. Even though they are taking on new challenges, women are still rising up to ensure that children are safe, well-cared for, and learning those fundamental lessons.

A Voice for Change

Throughout history, women have pushed to create a better and more open space for those around them. They have been a prominent voice for change and have worked to make a fair and just space throughout history. Whether it is fighting alongside others during petitions to bring justice to the attention of others, or working hard to protect the more vulnerable, women have fought to make the world a better place for generations to come.

Over the years, women have fought for their own equality time and time again. They pushed to be able to vote and to share their opinions. They fought to be able to enter the world of higher education and find their seat at the table. They have pushed against generations of systemic sexism to create a world that was open to them—and all of these changes have happened around the world! Whether it is Sojourner Truth listing out the ways she outperforms men and pushing for a more equal world, or Elizabeth Cady Stanton and Lucretia Mott paving the way for generations of activism, there is so much that has been accomplished.

A History of Medicine

Women have offered a powerful and lasting impact on the world of medicine and continue to do so to this day. For decades, women played the role of medical professional as nurses caring for men and women in need. They have handled a ruling majority of the workload while helping to oversee healing for countless affected individuals, and it doesn’t stop there.

While women have played a role in general medicine, their contributions during war times cannot be overlooked. Their hard work helped to save lives near battlefields for various wars, and they assumed a great deal of risk in doing so. These powerful and brave women were able to look the reality of war in the eye, and many of them advocated against it later on because they knew what it could really do. In 1849, Elizabeth Brackwell became the first female doctor in the United States and changed the game forever. Now, countless women are saving lives as doctors all around the world.

Changing the World Through Writing

History has had its fair share of prolific women writers, many of which are completely unknown. As writing became a medium to share stories and information, women were largely barred from the space. To combat this, countless women would write under a male pen name in order to have their voices heard, and their writing changed the world forever. Whether it is with fun fictional tales or compelling pieces of political or philosophical insight, women were able to change the world in secret. George Eliot was a famed writer alongside Charles Dickens, but her real name was Mary Ann Evans—and she changed the world of literature for generations!

Fighting for Other Women

Many of the most powerful women throughout history have worked hard to fight for other women. As a women’s activist, Jeannette Rankin was always trying to ensure that women had their voices heard. She was a part of the National Woman Suffrage Association and ultimately became the first woman elected to Congress. Joining the House of Representatives, she opened the door for other women to join core political spaces to help influence the world for the better.

There is no way to adequately cover what women have accomplished throughout the years, and it is obvious that there is still more to be done. As we push forward, women will continue to change the future of the world as we know it, whether it is raising the children that will define our future or seeking their own professional development and changing industries around the world. Women have pressed against impossible circumstances for years and thrived, fighting for themselves and others. The future will be changed by women and for women, and that will make it a better place with every new generation!