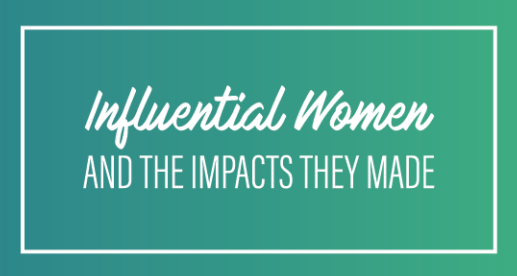 Influential Women and the Impacts They Made

Throughout history, women have made a lasting impact around the world. Every single day, women leaders are changing the way that people do business and run countries. Some women focus on professional development while others focus on influencing through other methods, but the benefits are always incredible. In this post, we will discuss some of the more influential women in recent years and the impacts that they have made in their respective fields. These natural-born leaders are helping to make the world a better place one act at a time!

It is always an accomplishment when a powerful and driven female leader finds her way into politics. Angela Merkel was able to pave the way for the future of women in politics in Germany by becoming the first female Chancellor that the country ever had. Through superior leadership, she changed the way that Germany operated by carefully helping the country to push through a difficult financial period, ultimately helping to boost the economy. Already, she has inspired women around the world to step up and pursue their goals, no matter how large!

In 2020, Kamala Harris was finally able to claim a coveted spot as the Vice President of the United States. Throughout the years, she has led a long list of firsts within the United States. She is the first Indian-American woman to enter into the Senate and the first African-American Attorney General in California. She is known for her influential speeches on the Senate floor and her expansive legal background that has helped her to pave an awe-inspiring career. Now, she will be carving out her role as a world leader to influence America for the better!

This powerful female leader is the CEO of Yum! China. As a strong industry leader in China, she has inspired generations of women to study hard and chase their dreams through exceptional professional development. She has led an expansive career in business that began with a commitment to her education and has only grown with time. As CEO of Yum!, she has been able to make advancements for the company and improve their practices with a greener focus. She has shifted Yum! towards a digital focus—and she has managed all of this while being a loving and dedicated mother!

When you step into a big role, there is always the potential to fail. This powerful female leader laughs in the face of failure every time she starts a new term as the prime minister of Bangladesh. With her commitment to her party and her people, she has held her role for longer than anyone throughout history, making her a record-breaker, as well as a talented leader. She has a commitment to her people and their well-being, keeping a keen focus on education, healthcare, and basic needs.

Melinda Gates has set out to make the world a better place and has well and truly put her money where her mouth is. She is known for her significant contributions towards bettering the futures of countless people in need. As the leader of the largest charity foundation, she is celebrated around the world for the support and help that she offers those that need her. She has led the foundation to greatness and empowered those around her to do more for the good of us all. With a focus on promoting women’s health, safety, and education, she is changing future generations of women forever.

Stacey Abrams: Leader of the Vote

Recognizing that not enough Georgia residents were prepared to vote, Stacey Abrams decided to help lead a substantial change. Her passion for a fair and just voting process inspired her to lead a grassroots movement that changed Georgia forever in 2020. Through her efforts and guidance, she was able to help nearly one million people register to vote in the 2020 election. Her efforts were intended to act as a direct opposition to voter suppression, and she fought endlessly to ensure that everyone’s voices could be heard. Her inspirational efforts led to a well-represented America, improving the Georgia voting process now and forever.

The film industry has always been known for its cutthroat nature and gender imbalances, but Donna Langley saw an opportunity regardless. She has been able to join Universal Filmed Entertainment Group as a Chairman and has helped to grow the group substantially. When the world shut down for COVID-19 and the movie industry began to sink, she rose to the occasion and provided innovative solutions to help the industry continue to prosper. Her efforts have changed the way that we experience movies, and how we approach working with independent film creators.

While everyone knows SpaceX’s Elon Musk, not nearly as many people know the powerhouse behind him: Gwynne Shotwell. As the president and COO of this historic company, Shotwell oversees all operations. She has worked as a space systems director and has played a key role in a wide range of major projects focused on space exploration and advancements. Her role will continue to improve the future of SpaceX as it pushes forward into bigger projects designed to change humanity and our relationship with space for the foreseeable future.

When women put their minds to making their dreams come true, something incredible happens. These wonderful and talented women are able to use their professional development for the good of themselves and the good of those around them. Women have changed the world and will continue to do so. Each of these women should stand as a lasting reminder regarding what we are all capable of if we put our minds to it. With hard work and perseverance, it is possible to leave the world better than you found it. The world needs more powerful women to get us where we need to go!