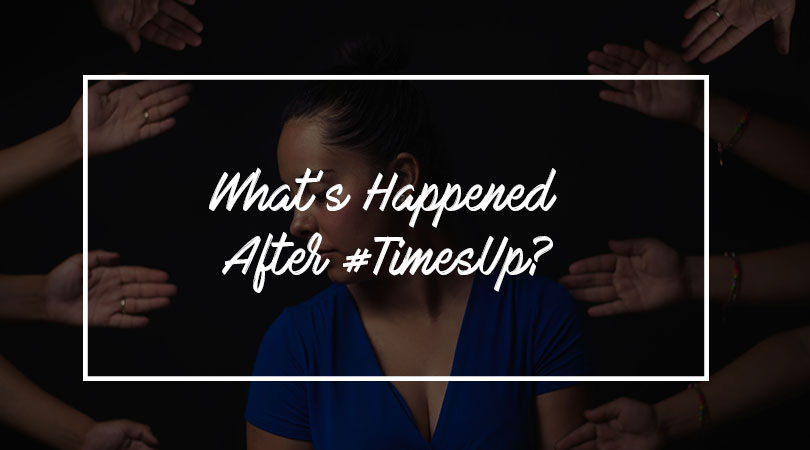 In 2018, at the 60th Grammy Awards, Janelle Monáe, American singer, songwriter, actress, and producer, delivered a speech in support of the Times Up campaign. She stated, “Tonight, I am proud to stand in solidarity as not just an artist, but a young woman, with my fellow sisters in this room who make up the music industry — artists, writers, assistants, publicists, CEOs, producers, engineers, and women from all sectors of the business…” add to the list, “assistants of every industry”.

The Times Up movement has impacted assistants across the world. It’s impossible to ignore the harassment that many assistants have experienced in their careers at one point or another. With the practice of confidentiality agreements, assistants have felt pigeonholed, unable to speak up with what they see and hear.

Thankfully, this year has taught us that you don’t need a red carpet opportunity to speak up about what’s going on around you.

Bonnie Low-Kramen, workplace expert and former assistant to Oscar winner Olympia Dukakis, was the first to tell us assistants are often poorly treated across all industries. With Bonnie’s experience in entertainment, she shares, “Olympia would come back from movie shoots in Hollywood and say, Bonnie, you are so lucky to be working for me. The assistants are treated so badly there by everyone, the actors, the directors, the producers. And it’s all about power and feeling so important that they can treat others abusively. How does this serve anyone?”

Low-Kramen has been an advocate against workplace bullying for decades. Last year, we worked with her to peel away at the detrimental issues within the executive assistant career and how we could all work together to take the next steps.

Now a year has passed.

What feats have we conquered?

“Those of us who have done this work for a very long time are experiencing a national moment that I don’t think any of us ever thought would ever happen,” explained Tina Tchen, former chief of staff to First Lady Michelle Obama. “We all believe we are at an inflection point where we can shift what is going on in our workplaces.”

Where to start if not legally

According to the American Bar Association, this year, we’ve seen emerging law practice areas that address employer response to harassment and the federal judiciary’s evaluation of its code of conduct and procedures for investigating inappropriate behavior.

According to ABA, the Supreme Court committee delivered its report in May of 2018. Among the recommendations were to establish a new office of judiciary integrity, a national hotline for reporting, revised ethics codes to both for judges and employees so that harassment is explicitly spelled out and changes in the procedures for filing complaints against judges and a bystander obligation to take appropriate action if a person or fellow employee sees improper conduct. The Ninth Circuit also made recommendations that are implemented.

Additionally, according to Women in the World, “Perhaps the greatest success has been Time’s Up legal-defense fund for lower-wage workers, which now boasts nearly $25 million in donations. The group says the defense fund has already been contacted by thousands of women across 60 industries — and that $6 million has already been used to fund 100 legal case and investigations for cases involving sexism or harassment in the workplace.”

As companies learn how to correct their company culture, a handful of organizations are taking concrete steps to stop sexual misconduct in its tracks. The first thing to look out for is trouble metrics. These indicators can be anything from excess absences, pay equity disparity, and explicit claims of unacceptable behavior.

However, not all organizations are waiting around instances of abuse to arise. According to Fortune Magazine, an assistant professor at the University of Wisconsin asked employees to fill out a questionnaire after a sexual harassment training course. There were several conclusions drawn from the results, but the most intriguing was the opinion that sexual harassment wasn’t a black and white issue. Most survey respondents conceded that restricting exchanges between friends and non-malicious gaffes caused resentment among the staff.

If training causes resentment, what will help?

The answer isn’t black or white either, but knowing the line for your organization is vital for successful and safe company culture. No tolerance policy for continuous behavior is a must. While many would assign all the blame to the perpetrator, some believe the bulk of the responsibility falls upon middle management. Paula Brantner, a senior adviser at Workplace Fairness, describes the importance of setting clear standards for middle managers to follow. “I advise employers to put in a separate provision in their corporate policies that say, you have a duty to report a claim if you hear anything.”

No employee should ever have to report the same individual twice, and companies should do everything in their power to recognize the signals for individuals who are afraid to speak up for themselves.

For the first time, assistants from every industry are becoming more confident and comfortable discussing sexual harassment in and out of the workplace. The conversation may have started with the Hollywood stars, but it’s been continued by the brave women who are standing up for change in their own community.

Simply having the conversation isn’t enough to effect real change. Unfortunately, harassment isn’t the only problem assistants face in the workplace. Instances of physical attacks are more common than you think, and these cases often go unnoticed. According to Psychology Today, victims are less likely to report sexual assault when they have a close relationship with the perpetrator. For assistants, this resonates far too well, especially in particular industries relating to the arts. When assistants demand the highest standards from their male counterparts, they’re setting the tone for years to come.

Ending sexual misconduct isn’t the only issue up for debate in the Times Up movement. Issues surrounding pay inequality and equal access to promotion are being brought to the forefront. In a recent Interview of Natalie Portman by Variety, she explains that issues surrounding compensation, paid time off, and family is often not made available. Portman has strived to make inroads in the way Hollywood treats the women on camera, and behind the set. While some business leaders would site significant progress from these disparities, the public has little patience for any inequality. If the time isn’t now, then when?

The list of injustices for assistants is long, but it’s important to keep positive progress in check. Assistants cannot afford to stay silent any longer, and the past year has proven that many are taking up the mantle for all of us.

Momentum must continue with assistants who can wield tremendous influence on their leaders. “We take in the weight of this moment in time, in history. Women and men assistants have an extraordinary opportunity to use their influence to effect positive change in their companies. After all, assistants see and hear everything. It’s time for them to say honestly what they see,” explains Low-Kramen.

The first step is to be informed. No change can happen if no one knows a change needs to occur. Psychology Today explains, “Leaders need to be informed about bullying, about the huge costs, including both the physical and psychological effects on targets of bullying, and the negative impact on workplace climate and productivity.” In most cases, bullying occurs behind closed doors. It’s the first step for us to come forward and inform our leaders and our companies that there is a problem. It’s also your responsibility to be informed of what your company’s policies are. Know not just what they say on paper, but how they handle their policies in practice.

Secondly, don’t contribute. If you hear rumors, stop them from continuing. If you see unethical behavior, report it. This goes back to keeping our companies informed. If they aren’t aware of how big of a problem is at hand, they won’t implement change. It’s incredibly important that we demand the time and respect from our companies to hear us out.

Low-Kramen urges, “Respect is at the heart of the matter. Staff is yearning to feel safe to speak up and know that they will be respected for who they are and what they think. Everyone’s voice matters. That’s respect.”

However, What Can I Do?

Challenge your company to update their policies and ask them how they implement them in practice. Draft a Code of Ethics for both employers and staff. “Change begins at the top. A commitment to education and training is needed to recalibrate expectations and our company cultures,” explains Low-Kramen, “Harassment, bullying, and abuse need to be met with zero-tolerance policies which assistants can help to create.”

We need to hold our leadership accountable for the ultimate benefit of companies. Transparency and accountability are helping companies with the bottom line. Happy and healthy workers mean higher productivity, decreased turnover, and overall, increased revenue. Doesn’t every company’s leaders want that?

From the start, we’ve acknowledged there is a long way to go. However, it must continue. “It’s time to break the cycle of unacceptable pain and abuses in our global workplace. Let’s do this for our daughters and sons and all the people coming up behind us. Leaders and assistants can speak up and work together to choose to take a fresh look at the company culture and staff expectations and change them. It is in our power. Every single leader and every single assistant has an opportunity for change every day.”

Our time is not over. It has not ended. And we won’t let it lose momentum. It’s time, now more than ever, to keep the ball rolling.